Frontera NorteSur on “Echoes of ’68” in Mexico

Posted on October 1, 2014 by nicholasjoncrane 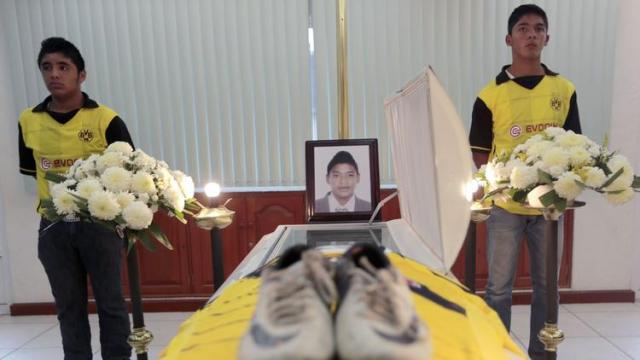 “The municipal police of Iguala hunted them [students at Raul Isidro Burgos rural teachers’ college] like rabbits,” wrote La Jornada columnist Luis Hernandez Navarro. “Despite being students, they were treated as if they belonged to a rival cartel.”

Such violence is, unfortunately, not without precedent. But the events in Guerrero occur at a time when students are on strike in Mexico City (at the Instituto Politécnico Nacional; video details students’ positions, here) and on the heels of iconic 1968 activist Raúl Álvarez Garín’s death last week. Activists will march to commemorate the Tlatelolco Massacre of 1968 tomorrow (something I discuss in a recent essay), and these events are sure to lend energy to that commemorative march.

“Never Forget October 2!”  The slogan captures the spirit of the annual commemorations of the military-police massacre of hundreds of protesting students during the Olympic Games in Mexico City back on October 2, 1968.

In 2014 new killings of Mexican students and young people, coupled with a massive student strike at the National Polytechnic Institute (IPN) in the capital city-one of the centers of the 1968 movement-is injecting fresh bursts of outrage and activism into this year’s October 2 demonstrations and activities.

The students had reportedly seized three private buses and were collecting donations while on their way, ironically, to the October 2 commemorations in Mexico City.

Regrouping from the attack, the students and their supporters, including union leaders, were fired upon a second time in the streets of Iguala. Three students, including a young man who was later found with his eyes gouged out and the skin ripped from his face, were killed in the attacks, while an undetermined of others were wounded and dozens of others disappeared.

“The municipal police of Iguala hunted them like rabbits,” wrote La Jornada columnist Luis Hernandez Navarro. “Despite being students, they were treated as if they belonged to a rival cartel.”

Uriel Alonso Ortiz, spokesman for the Atoyzinapa students, later said that at least 13 of his missing companions had turned up safe. “It was confirmed that many had managed to leave Iguala after the shooting,” Alonso said. “They already called and said they were okay. Some were injured, but they are at home.”

Ramon Navarette, president of the official Guerrero State Commission for the Defense of Human Rights, added that authorities would continue searching for the remainder of the missing students.

In a second, possibly unrelated attack on the same evening, unidentified gunmen fired on a bus carrying members of the Avispones soccer team of Chilpancingo, which had just finished beating the local Iguala team by a score of 3-1.

A promising, 15-year-old player for the Avispones, David Josue Garcia Evangelista, died in the fusilade, while the bus driver and 12 players were wounded.  A woman who was passing by the scene of the shooting in a taxi, Blanca Montiel Sanchez, was likewise cut down by the bullets.

“Death to the bad government that took him from us!” shouted hundreds of funeral goers at David Garcia’s burial. ”Justice!  Justice!”

Abarca, who was attending a dance at the time of the mass killing, distanced himself from the violence, claiming that control of the municipal police force is now in the hands of a centralized state command structure based in the state capital of Chilpancingo.

In dramatic developments, Abarca told the city council September 30 that he was taking a 30-day leave of absence and, after again denying any guilt in last week’s violence, abruptly left city hall with his wife . Only minutes later, state and federal police swooped into the building reportedly looking for Abarca, Flores and others connected to the local administration.

Mexican soldiers and police then raided Abarca’s home, but did not find the mayor on the premises; witnesses said the raiding party departed with three of Abarca’s domestic workers in their custody.  A police-military visit to the home of Abarca’s brother also came up empty-handed.  Abarca and Gov. Aguirre represent the center-left PRD party, but leaders of social movements like the Atoyac Citizens Front and Popular Guerrero Movement that formed the historic base of the PRD demand the politicians’ impeachments because of the Iguala Massacre and other instances of repression.

Both administrations have come under popular scrutiny for human rights violations, with some activists blaming Abarca for the 2013 killings of Iguala Popular Unity movement leader Arturo Cardona and two of his supporters.

Legendary for their militant activism, Ayotzinapa students seized two Chilpancingo radio stations September 28, broadcast messages demanding justice for their slain classmates and warned the government that further attacks would not be tolerated.  On Monday, September 29,  about three thousand students, parents and supporters rallied outside the Guerrero State Congress in an attempt to speak with lawmakers.

Finding no lawmakers around, members of the crowd then broke windows, stormed the office grounds and set fire to a legislative library.

As the week progressed, other protests were held in Iguala, Tixtla and Arcelia. Students from rural teachers’ colleges across Mexico converged on Guerrero in solidarity with Ayotzinapa, and the large Guerrero State Coordinator of Education Workers discussed work stoppages to protest the Iguala killings.

The Iguala Massacre was added to the agenda of Section 22 of the National Union of Education Workers in neighboring Oaxaca state, as the powerful organization staged several protests this week against repression. In addition to the murders of the Ayotzinapa students, Section 22 protested the recent disappearance of Veracruz teacher movement spokesman Zenyazen Escobar Garcia, the September 27 killing of a Section 22 member in Oaxaca and the attempted detention of a teacher caravan to Yucatan also last weekend.

“For our fallen friends, not a minute of silence but a lifetime of struggle!’ declared Section 22. “For each voice they silence, thousands will rise up!’

Only days before the Iguala Massacre, the police killings of three young men aged 17 to 18 triggered protests September 22-23 in Ciudad Hidalgo, Michoacan.  Residents torched a vehicle and fought with police outside city hall, resulting in 19 arrests for vandalism and other alleged crimes. Separately, five municipal cops were detained and charged with murder in the case.

In an ironic timing of sorts, activists, intellectuals and students gathered at the Autonomous University of Guerrero last weekend for a seminar on the life and works of Jose Revueltas, the acclaimed Mexican writer and leftist activist who was jailed repeatedly by government officials between the 1920s and 1960s and even accused of instigating the 1968 student revolt. The shootings in nearby Iguala gave the event an extra relevancy.

“One of the things that has stayed the same is the possibility of criminalizing youth,” commented writer and presenter Juan Villoro. “A fact of being young in Mexico is the possibility of being collateral damage.” The participants of the Chilpancingo seminar devoted one-minute of silence to the memory of Raul Alvarez Garin, a leader of the ’68 movement who passed away last week.

But Alvarez’s spirit appeared alive and well this week as IPN students and their allies took to the streets of Mexico City in a massive show of force to press a 10-point petition.

The students demand the firing of IPN Director Yoloxochitl Bustamante; the expulsion of  police and goon squads from the institution; greater government spending on science and technology; transparency in the role of private interests at the school; the preservation of humanities, math and physics courses; and the cancellation of administrative and academic changes that include a new rule students say infringes on freedom of expression by prohibiting any activity that contradicts  “the order, good name, academic prestige and dignity of the institution.”

IPN students contend that the school’s administration is attempting to transform the school’s various colleges into “training centers for the preparation of cheap of labor.” Bolstered by sympathetic students from the National Autonomous University of Mexico (UNAM) and the Autonomous Metropolitan University of Mexico, an estimated 50,000 students marched through Mexico City on Tuesday, September 30.

At the conclusion of the march, the protesters were met by Interior Secretary Miguel Angel Osorio Chong, who agreed to answer their demands no later than Friday, October 3. On the eve of the October 2 anniversary, UNAM students shut down at least two campuses of the giant institution in solidarity with their fellow students from the IPN and Ayotzinapa.

2 Responses to Frontera NorteSur on “Echoes of ’68” in Mexico